My 5V computer case fan arrived and I was very interested to see if I could power it from the Raspberry Pi. So I turned everything off, and plugged it into the GPIO cable. I had put the case back together with this cable because that makes it easy to access the GPIO. I went to fan manufacture and found that the Red wire was 5V input, the Black wire was ground, and the Blue wire was for the frequency readings. So I used some of the recent F/F jumper cables and plugged GPIO pin 1 into the Red for power and GPIO pin 3 into the black for power. Powered the Raspberry Pi on and right away the fan started up! Success! Now to go on and figure out a way to leave it plugged in and via software be able to control when the fan powers up. And possibly try to get the Blue wire working as well.

This site http://elinux.org/RPi_Low-level_peripherals has a diagram of the GPIO pins.

First picture is the Raspberry Pi powered off… Hard to see, but the fan blades are stopped. 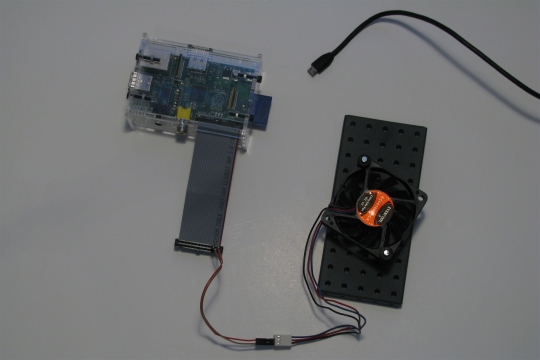 Next two shots are powered and show the lights on the Raspberry Pi and the fan is a blur.

And the next is the jumpers that came from Adafruit…

I stumbled across this site today http://hypnocube.com/ and was wondering about a Raspberry Pi controlled version…. They have a kit to buy that is currently $150 for the 4x4x4 cube. Sounds as if custom programming is limited to minimal so that is a bummer. There is a video here of someone who has done this with a Raspberry Pi. His notes about it are here. And there are some videos of people running it off an Arduino. Here is the youtube link to a demonstration of some of the things an 8x8x8 cube (blue) can display. This video and others from the same channel showing what the cube can do are amazing! A tutorial can be found here on a 4x4x4 cube using an arduino.

I was sitting around today wishing that my Gertboard was here… But its not. One of the things I am planning on doing is messing around with temperature and humidity sensors. It is possible to do this without a Gertboard, but I would like to have that hardware experience before I try anything directly on the GPIO pins. There is a very good forum discussion on the Raspberrypi site here.

There is a temperature sensor and a humidity sensor on SparkFun that look like they would work. There is also a waterproof temperature sensor on SparkFun as well. These sensors are different in that some are a 1 wire interface and others are a 2 wire interface. These sensors would be extremely helpful for the case of a timelapse camera. The current case turns the heater on at a certain temperature and the fan on at a certain temperature. This works, but I cannot change/edit that temperature. One of the major problems is humidity, especially in a greenhouse environment. If I could control the fan I could have the fan cycle every X minutes no matter what the temperature.

Currently when I need to download the pictures from the timelapse project I plug in the Ethernet cable. This works, but would not work for the v2.0 case. I am thinking of building a case similar to these here. However these cases are very expensive, and do not offer much flexibility for a Raspberry Pi and other electronics. And so I would need another way to connect to the Raspberry Pi. As mentioned on this forum/article the Edimax adapter looks like it is a good choice.

Hoping to have some more pictures, maybe a short timelapse of the project so far up soon!

A word of caution about Newark/Element14

While I was looking for the Gertboard and the Raspberry Pi I found a precision knife and some solder (the Gertboard comes as bare board and soldering is required to build the board) and these items were only a few dollars. So I added them onto the order. When I checked out it only showed me the Merchandise total (because the items were Back Ordered) so I clicked Submit. The next day I get charged over $10 for one of the $3 pieces and they had shipped it separately from the other pieces. And another item that i ordered was a Direct Ship from the UK meaning that it had a $20 shipping charge. I would think that their website would ask before charging over twice, or in the second case four times the amount for shipping as the original product. However this is not the case, and there are multiple bad reviews online saying the same thing. After getting the run around – I contacted chat, who told me to call, who told me to email – I finally got it straightened out and we got the problem resolved. Newark was nice enough to reverse the shipping charges on the small items, and the large items are still in Back Order status.

So this is a word of caution before purchasing from Newark/Element14. I am NOT saying to not order there, I am saying to be cautious about the shipping charges.

My Gertboard is not supposed to ship until October 17th. If anyone has one I would love to hear your thoughts on it!